Jonny looks back on his exploratory trip to Nepal in the Autumn of 2013 and sets the scene for his return next week.

In October/November of last year I made my first fieldtrip to Nepal. This one was about setting the scene for the main research trips of 2014, which this blog has been describing. I came to do a practice run with the questionnaire I’d devised, to conduct interviews with locals on a range of background issues relevant to my study, and to check out the areas where the team and I would be collecting data later on: Sagarmatha (Everest) National Park (SNP) and Annapurna Conservation Area (ACA). As my government research permit hadn’t come through by then (or till a lot later – see Hakuna Matata), I wasn’t able to visit SNP. But I had got my research permit from the organisation that operates ACA – the National Trust for Nature Conservation. I flew in to Kathmandu, had meetings with a few big conservation cheeses, bagged the permit and headed for the hills.

Foothills of the foothills

Maurice wrote recently about the long road to Jomsom – the bumpy, dusty jeep track that took him and the rest of the research team around the western side of the Annapurna massif to our second study site in Lower Mustang. On my exploratory trip in 2013, I took the long road to Chame on another bumpy, dusty jeep track around the eastern side of this great mountain chain. When the buses gave out, my research assistant, Prawesh, and I jumped in a jeep to continue our journey. The problem was that so had 11 others! In a jeep built for 7 passengers, they’d added an extra row of seats. We found ourselves bunged in the boot with the luggage. Later on we picked up other passengers who sat on the roof or hung on for dear life to the runners.

View from the boot

All of this wouldn’t have been a problem if it was a nice paved road with a gentle incline. It wasn’t. The track wound its way up into the mountains, tracing the edge of the deep Marshyangdi river valley. The jeep followed torturously, swaying and slipping over rocks and ruts. The glacial melt-water from the roof of the world surged downstream far below us, as the sides of the valley steepened. In places the road had literally been blasted out of the rock. A monument to engineers of the Nepali army who had died constructing the route was a sobering reminder of its dangers. And our journey, which should have taken six hours or so, ended up being split over two days and two jeep rides, as landslides had blocked the road in two places. Then came another two days of walking. After three flights, two bus rides, two jeep rides, and 12 hours of walking, I had finally arrived in snow leopard country.

Prawesh and I spent a week in Manang, the district HQ in what is Nepal’s least populated region. The locals seemed to be vastly outnumbered by the endless procession of tourists trekking the world-famous Annapurna circuit. I was ready for them all to leave after a few days – how the people living here year round put up with them I have no idea! Though it might have something to do with all the money they bring to spend on food, accommodation, porters and souvenirs. We did interviews and questionnaires and basked in the beauty of some of the most incredible scenery you will ever see. Then we had our closest encounter to date with the snow leopard.

We had been surveying in a village several hours walk above Manang when we got a tip-off that a snow leopard had killed a blue sheep further up the valley. We went as fast as you can at almost 4,000m/13,000ft but by the time we got there it was too late. Someone had disturbed the carcass (and, we suspect, taken the meat). The remains of the blue sheep were there, as were the paw prints of its killer and the signs of a struggle. But the snow leopard was gone. Watching us, perhaps, from the cliffs above, but still gone.

This near miss was to set the scene for the rest of the exploratory trip in 2013, and the fieldtrips proper so far in 2014: plenty of time spent in snow leopard habitat, plenty of signs of snow leopard and/or their prey, no snow leopards. On Saturday past the rest of the team crossed the 5,416m/17,873ft Thorung La pass connecting Lower Mustang – where they’ve been working – to Manang – where I was in 2013, and the last part of our research itinerary. I’ll be rejoining them next week for the final, intense weeks of the study, including a side trip to the remote NarPhu valley on the border with Tibet. There’s still a lot to do. There’s not much time to do it in. And there’s still the ghost of the mountains, out there, waiting to be found, on these stairways to heaven. 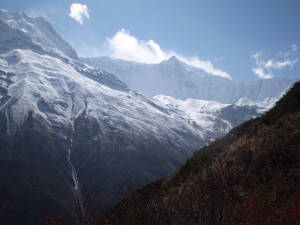 The mountains of the ghost

One response to “Stairway to heaven”